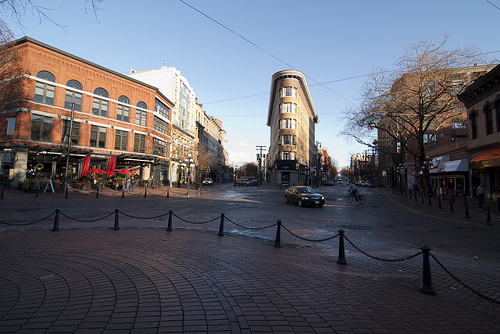 [post_thumbnail]Gastown was named after “Gassy” Jack Deighton, a Yorkshire seaman who arrived in 1867 to open the area’s first saloon. The town soon prospered and became the general centre of trade and commerce on the Burrard Inlet in downtown Vancouver, BC. Gastown is coated with ancient cobblestone streets and full of unique old buildings with lively bars and clubs that you just cant miss. It is the perfect place to find new and old, trendy cafes and restaurants that serve some of Vancouver’s finest coffee and delicious cuisine.

One of the most famous landmarks in Gastown is the old Steam clock. It’s just an old clock and one of the most popular tourist stops in downtown Vancouver. Gastown is thriving with fashion retailers, art galleries, architecture firms and much more art oriented shops. It also caters to tourists very well with several souvenir shops and travel agencies. There really is something for everyone including annual festivals such as the Vancouver Jazz Festival held every summer. A common essence of Gastown architecture is the use of brick. Most old and new buildings in Gastown are built using brick, at least for the first few stories. If a building that contains brick is torn down, any part constructed with brick will often be spared. Off the main route through Gastown known as Water Street you will find many dark alleys and courtyards. It is suggested to stay out of most of the alleys as they are frequented by drug addicts, however there are a few worth seeing just for scenic purposes. Mossy Bricks – Gastown in Vancouver, BC Graffiti in the Alley – Gastown, Vancouver

Gastown continues to thrive on tourism as more and more new visitors walk the cobblestone streets each year.