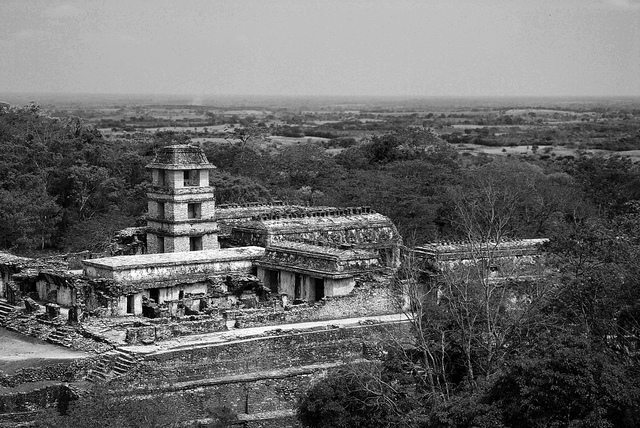 [post_thumbnail]It was early in the morning in Palenque town, one of the most popular small towns for backpackers and adventure travelers in the Chiapas province of Mexico. We had our usual breakfast of yogurt with granola along with a cup of instant coffee, discussed the days events that were to unfold and we began our trek down the road towards the infamous Mayan ruins named Palenque.

To see the park early in the morning was ideal, there would be fewer tourists and much less humidity in the air. The Palenque region of Chiapas, Mexico tends to be extremely humid as there is lots of jungle. I also enjoy this time of day for photographs.

Perched on the the first rise of the Tumbala Mountains, the ancient Mayan city of Palenque flourished in the 7th century and the ruins date back to 100 BC leading to its fall in 800 AD. One can only imagine the events that took place many years ago. The hieroglyphic inscriptions have revealed a lot but there are still many questions unanswered. We toured around the ruins for several hours and discovered many different temples and inscriptions. Our guide was very entertaining and was able to interpret the meanings of the inscriptions that we saw. It helped us to understand more about the Mayan Culture. The hieroglyphic inscriptions on the monuments throughout the Mayan city have helped historians discover much of the history of Palenque. The great ruler of Palenque Pacal the Great was buried deep inside the Temple of Inscriptions. His tomb has been excavated and is open to the public for viewing.

Our guide took us away from the main temples and into the jungle where we found several temples not yet uncovered. These temples appeared to be even more crumbled than the others. To resurrect a new temple can take an excavation team several years in order to uncover it safely. Inside the Temple of Inscriptions – Palenque, Mexico

Dense jungle encompasses the grounds all the way to the Gulf of Mexico. It would have been quite a trek for someone to discover the Mayan City years ago. Because of the dense jungle and many different corners and hiding places it is recommended to tour the city grounds in groups and not by yourself. There is a history of tourists being robbed in various places. We definitely felt safer when everyone else was in view. Vine in the Jungle – Palenque, Mexico Since the fall of Palenque in 800 AD, dense jungle took over burying many of the temples and by 2005 a mere 10% of the city had been uncovered leaving more than 1000 structures left to be discovered. The Mayan city of Palenque is an unbelievable site to experience. It is definitely a step above the Mayan ruins of Chichen Itza or Tikal in Guatemala. Palenque is highly recommended and well worth the visit.